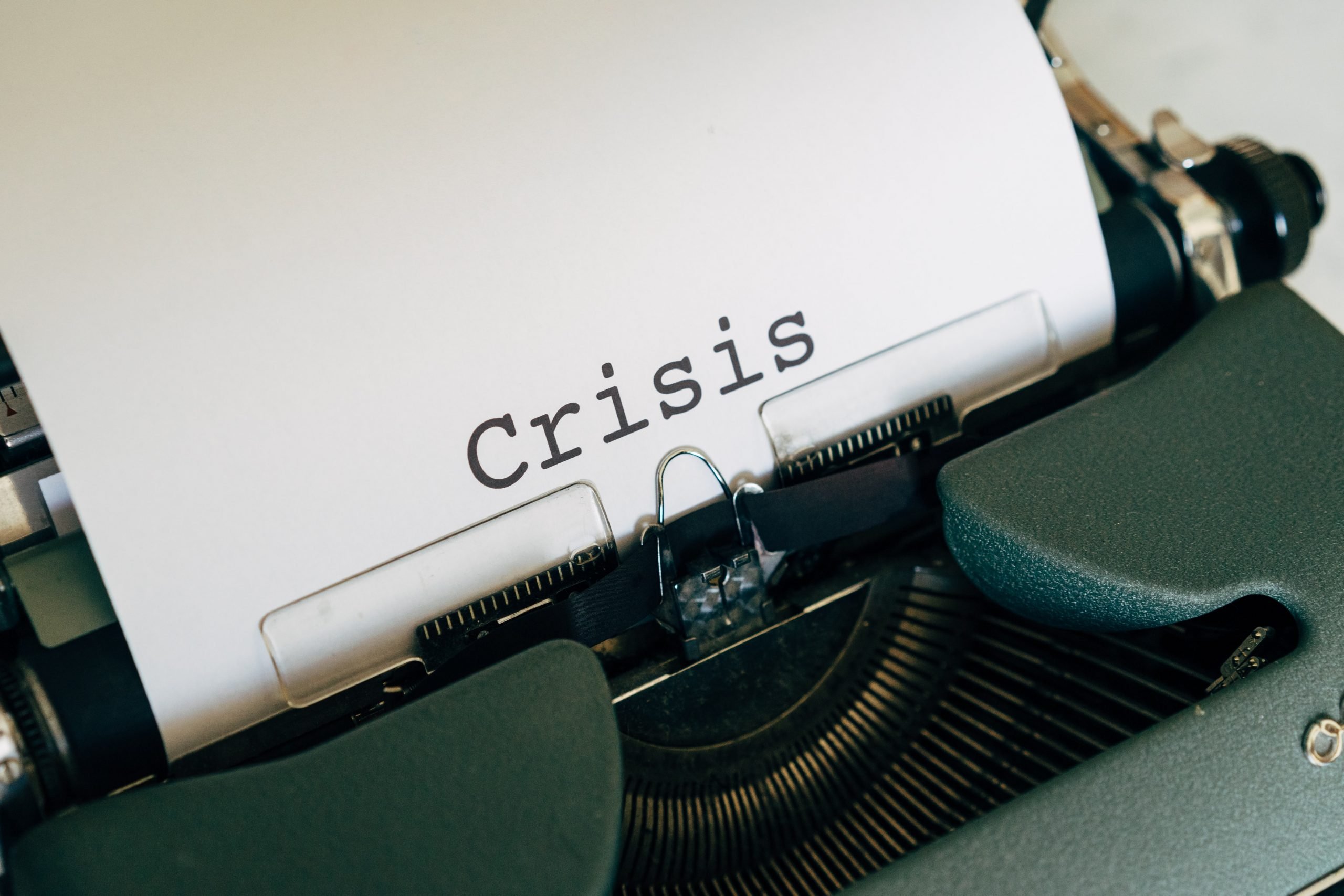 Facebook Twitter LinkedIn
In the shadow of a global pandemic with 20.5 million people sidelined at the end of April 2020, the U.S. Labor Department reported a record 14.7% jobless rate, the European Commission released projections of Europe’s worst recession in history, India’s unemployed topped 120 million and yet the S&P is close to all-time highs. Wow! Experience from the Global Financial Crisis (GFC) of 2008 gives a sense of what’s to come. How long will the contraction phase last? How will fiscal and monetary policies cohabit? Will the risk-free rate be negative? Will there be a vaccine? What will happen with trade between the US and China? Is a pension crisis looming?

It’s a perfect storm for pension funds as it translates to deteriorating funded status. Strategic asset allocation matters. The returns from public markets will be marginal, volatile and risky. Private capital and its illiquidity premium will outperform at this point in the cycle. A high allocation to a defensive alternative income-oriented portfolio achieved with rotation into assets like private credit and infrastructure will outperform other asset classes.

Many of the traditional monetary and fiscal tools used during the 2008 Global Financial Crisis (“GFC”), have been dulled and will not be as effective in the current pandemic. Europe and the rest of the world will struggle to bounce back as fast as the U.S. from a recession unless China launches a 2009-style stimulus effort. Chinese stimulus looks unlikely as policymakers in Beijing worry that opening up the flow of credit could add to financial instability. The Fed with a traditional monetary response has cut its benchmark interest rate to zero and signaled that rates will remain low or negative until we return to full employment and a 2% inflation rate. Even with the US Government bringing an unprecedented fiscal response by printing trillions in deficit funded stimulus, a 2% inflation rate is likely years away due to demographics and disinflation. The possibility of an extended contraction period or an even longer duration double dip recession is high. Only time will tell if and when we will recover back to pre-crisis economic activity. Will we experience a 95% recession with a U or W shape, or experience an 80% recovery (near depression with an L shape)? Jerome Powell, Chairman of the US Fed has already stated “a V shaped recovery seems unlikely”. For context, the last time the U.S. economy contracted on an annual basis was during the GFC in 2009, when it shrank by 2.5%. The last time it shrank by more than 10% was in 1946 at the end of World War II. Prior to that the U.S. economy shrank by 12.9% in 1932, at the height of the Great Depression. Oxford Economics puts the 2020 Covid-19 Global Pandemic decline at 12% and the loss of 1 million jobs. Capital Economics sees a 10% decline in GDP, TS Lombard 8.4% and Nationwide 8%.

With competition for assets from central banks traditional fixed income investing will be challenged. It’s a perfect storm for pension funds as lower returns translate to deteriorating funded status as liability growth remains consistent while investment returns diminish. The spread between US investment grade yields and those of emerging markets is the widest since 2002 and far wider than during the GFC as investors flee risk. In a low-interest-rate low risk environment, yield will be a more important component of total return for pension funds, foundations and life insurance companies. The average yield on investment grade debt is now sub 4% and declining with similar trends in blue chip public equities. Where should a long-term investor turn to? Below is an example of what a liability hedging defensive strategic allocation might look like to keep fully funded through a contraction. 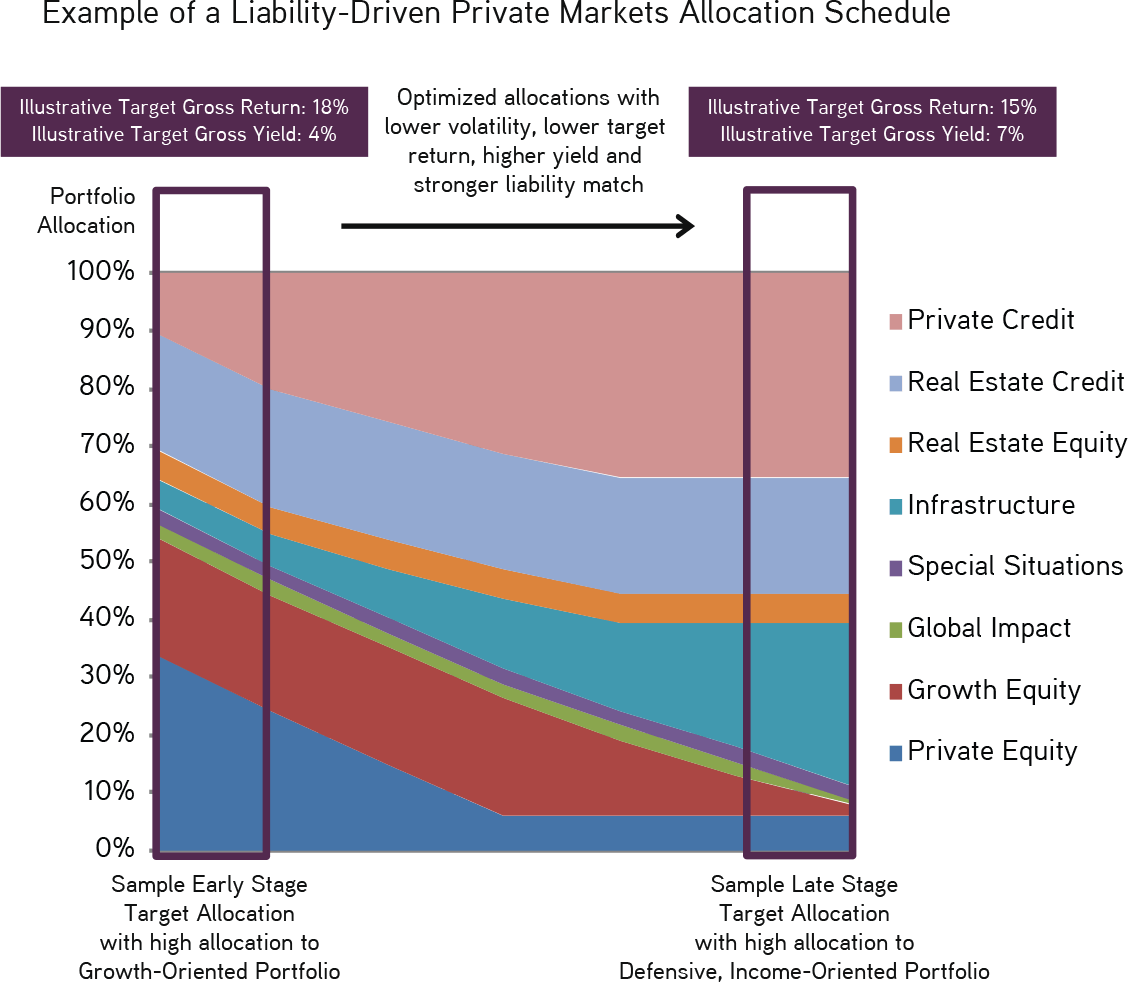 The repercussions for insurers and pension funds having to endure up to 10 more years of low interest rates may be harsh for their balance sheets. By allocating traditional fixed income to private credit, capital is preserved through the downturn and as the market recovers an experienced manager will protect real returns for investors having incorporated floating interest rate facilities. In the last two major cycles, funds raised in and around economic downturns performed the best according to Preqin (see chart below). 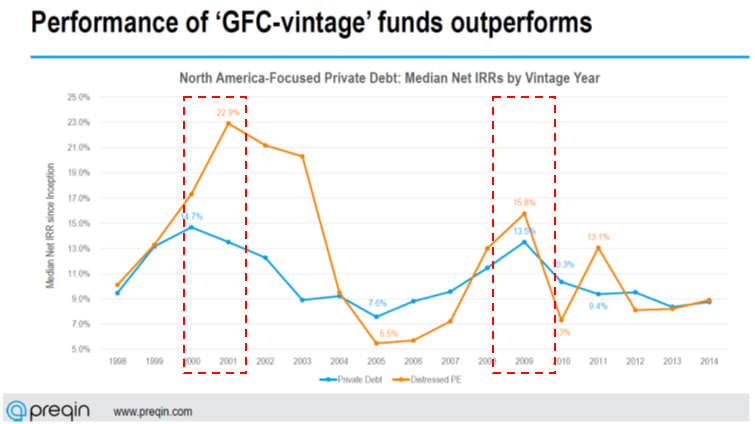 Private credit has been an attractive asset class through several cycles as Preqin has shown and particularly attractive in an economic downturn. As public investments get crowded, the large alternative managers will attract larger and larger buckets of capital requiring them to do larger and larger private market deals and crowding out the upper end of private markets and reducing returns invested therein. Demand will exceed supply as large managers will be in competition with pension funds, insurance companies, actors retrenching from emerging markets and central bank fiscal policy. This will force institutional investors to look to smaller asset managers who work in smaller and less liquid markets.

There’s more market volatility to come. If history teaches us anything, it is that periods of crisis can present opportunities for success. There will be winners and some companies will not survive. Although the long-term impacts of this global pandemic remain to be seen, fund managers and investors that are diligent and agile are likely to emerge from this crisis in a position of strength and poised for future success.

Bond Capital is an award-winning provider of structured business debt and equity to successful business owners and management teams wishing to capitalize for growth, acquisitions, or buyouts. Since 2002, Bond Capital has provided funding and advice to later stage companies with strong management teams and EBITDA between $2 million and $50 million.  Bond Capital has been  named by Preqin as a top global performer by a private debt fund for each of 2015, 2016, 2017 and 2020. Bond Capital is located in Vancouver, Canada.