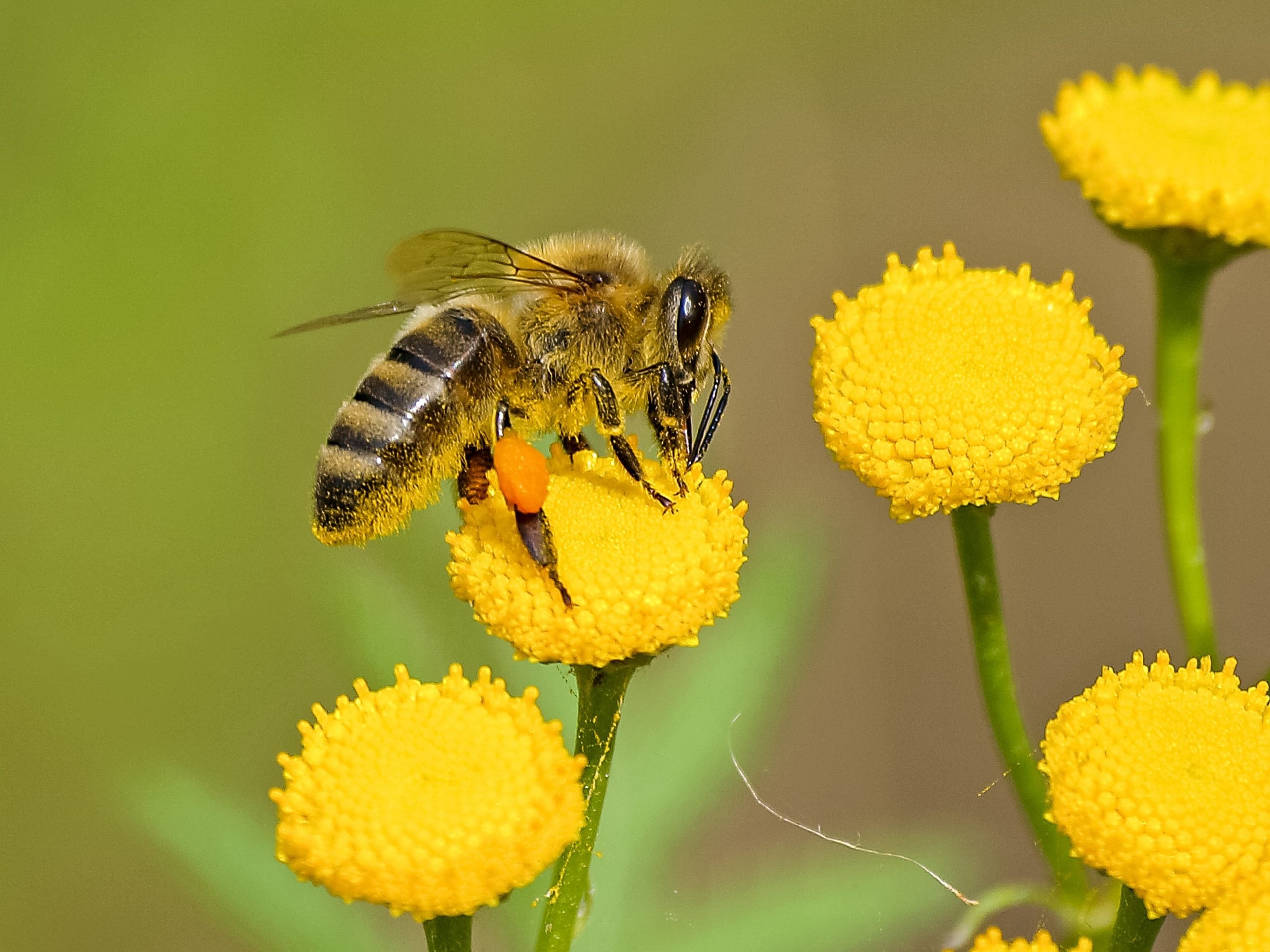 Facebook Twitter LinkedIn
Global interest rates are near zero and, with massive amounts of quantitative easing by central banks, interest rates are poised to remain low for a sustained period of time.  The downward force on interest rates looks to be sustained by continued efforts by central banks, a lack of consumer and business demand in a COVID-19 recovering economy, followed by a demographic trend similar to that of Japan from the 1990’s onward.  The implications for traditional fixed income investments may mean very meager or negative returns unless alternatives are found.

COVID-19 and associated lockdowns in North America in March 2020 saw US and Canadian interest rates slashed 150 bps to near zero.  Meanwhile, Europe has had near zero rates for almost a decade while Japan has been near zero for almost two decades. According to Bloomberg, there are about $14.3 trillion of debt in the world at the moment with negative returns for investors, as the number of central banks supporting an extremely low interest rate regime has doubled. 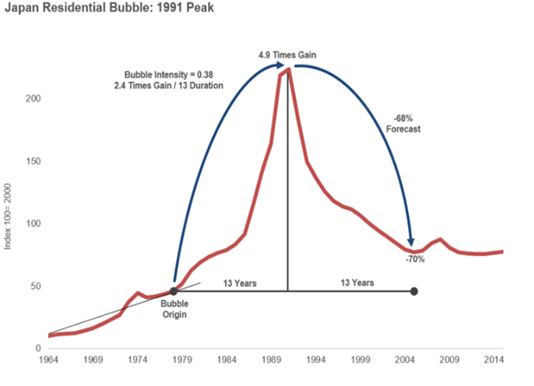 In the late 1970’s until 1989, Japan’s lowering of interest rates inflated asset prices such as real estate.  In 1990-91 Japanese interest rates rose and real estate values dropped, but then Japan lowered interest rates again and instead of rising again, real estate prices continued to fall (or deflate).  This is where the rest of the world may be going. As Blackrock puts it, “[t]he extraordinary amount of stimulus that will ultimately be required to combat this crisis is going to have a significant impact on the aggregate leverage on government balance sheets and global central banks. While the stimulus is necessary in the short- to medium-term, it is probably deflationary over the long term. It’s going to place limits on broader expansionary policies and will probably reduce global growth. And that will lead to long-term pressure on global rates, likely keeping them anchored closer to zero or below for a very long time.”

“The recovery may take some time to gather momentum and the passage of time can turn liquidity problems into solvency problems,” Federal Reserve Chairman Jerome Powell said.  High unemployment levels often lead to bank delinquencies as noted by Deutche Bank in the chart below.  Will consumer demand reverse itself or, after a stair step recovery, will we still be behind previous levels of economic output? 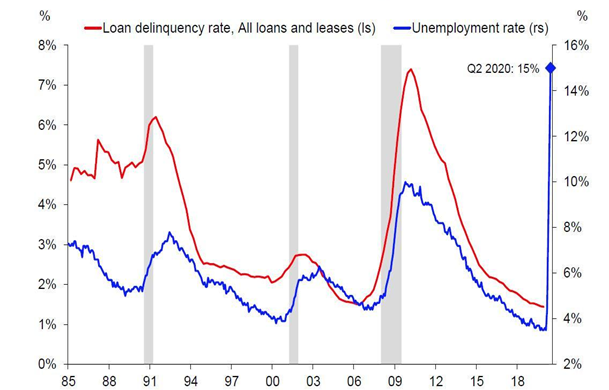 The current COVID-19 economy is unlike many we’ve seen before.  The pace of unemployment is unprecedented as compared to prior downturns (see chart below), and the dispersion of recoveries between industries will be broad as different sectors see different demands. 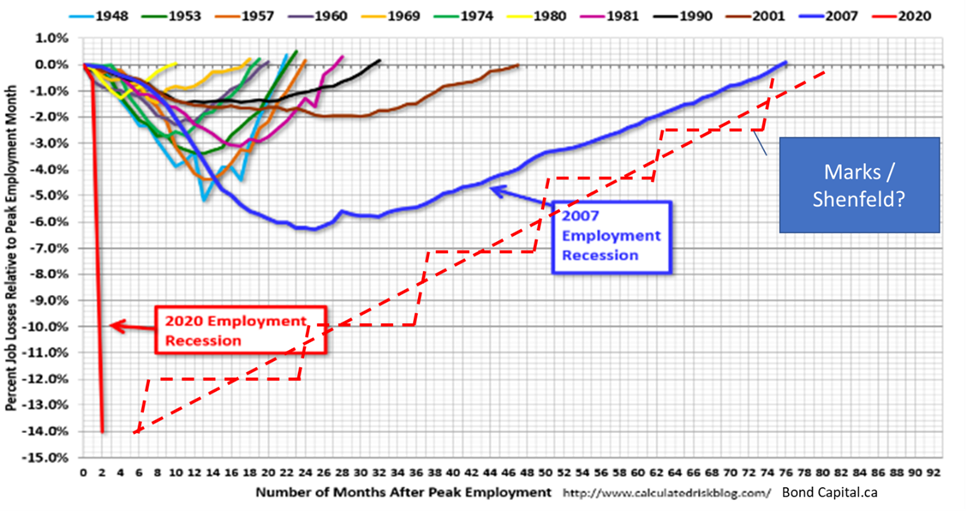 Avery Shenfeld, Chief Economist at CIBC, likens the recovery to a drop (seen above) followed by staircase like recoveries as different industries come online. Business recovery may take longer than usual.  In a recent article, Howard Marks argues the recovery may look like the Nike Swoosh.  In the same article, Marks goes on to quote Randall Kroszner and former voting member of the Federal Open Market Committee:

“There is no limit on the ability of a central bank to create reserves as long as someone is willing – or through government edicts, forced to take them… The key question is the impact of that reserve creation on money    supply and the demand for money.  Treasury’s appetite for deficit financing will remain high as long as real and nominal interest rates remain low.

“I think this is the key point: whether it is Japan, where the BoJ’s balance sheet exceeds 100 percent of GDP and continues to grow rapidly, or the ECB with a balance sheet of more than 50 percent of Eurozone GDP and growing, or the Fed with a balance sheet of just over a third of US GDP and growing, inflation has been below the 2 percent target and expectations of inflation over the short and long term horizons remain low….  The ongoing uncertainty over the course of the virus and the policy responses will undoubtedly keep the demand for safe liquid assets high for some time.”

The Economist’s weekly magazine of May 1st coined “the 90% Economy” is coming.  The economy will come back but only 90% compared with pre-COVID-19 pandemic, with reduced demand for a longer period of time.  As Berndan LaCerda of Moody’s notes, “If unemployment goes up 1 percentage point, we expect house prices to fall 4 percentage points”.

With reduced demand and falling asset prices, inflation will not be a concern for years.  The persistence of negative bond yields “have fundamentally changed the appeal of government bonds versus gold as safe havens,” said Xiao Fu, Head of Global Commodities Strategy at Bank of China in London, and “[t]his has profound implications for long-term portfolio construction as gold becomes a necessity rather than an optimal allocation,” she added. Central banks have been the keenest buyers of gold, purchasing 5,019 tonnes of gold worth more than $200bn since 2009, according to the World Gold Council. More than a decade from the credit crisis, inflation is still scarce, with wages increasing only modestly despite large drops in unemployment.

As the yield on readily available public fixed income securities becomes negligible, investors will have to seek out new and or enhanced fixed income sources to earn a return in a fixed income portfolio. Interest rates may indeed be lower for longer which is behind the ascendency of the private debt asset class.